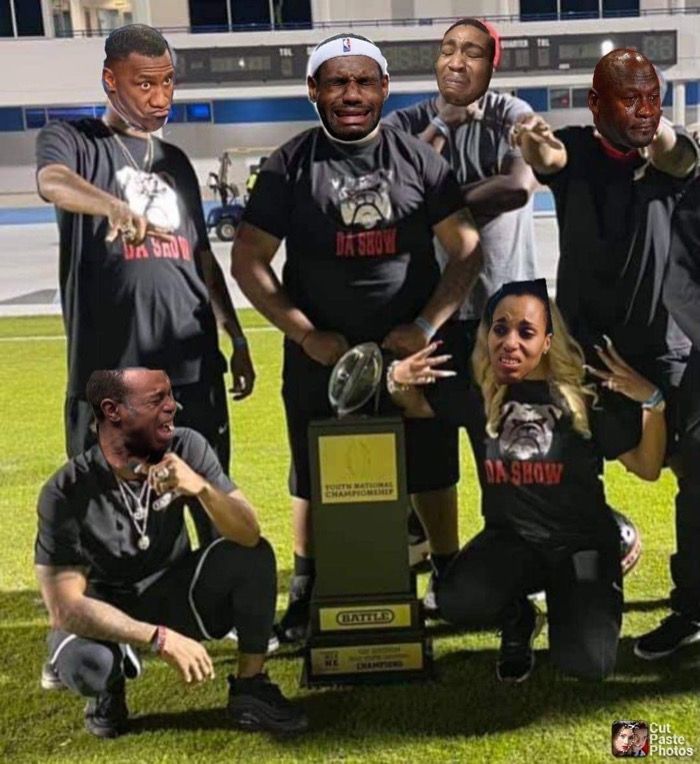 Every since the KnockOff Guru Coach Ike been over there, the whole org has had bad luck! Let’s start off with 12u losing yet once again 24-0 (we won’t be long about them because it’s really not much as a whole to care about anymore). That Oklahoma team had one RB, 5, ran the ball up RDU ass like a prison gang rape. But them losing the game ain’t the real story here.. they lost the game but they won the fight..yes nigga…the fight…Some adults chased down a kid because he taunted they losing ass and took they towel. And would you believe these grown peopl ( Zyquan, who’s 22 years old and too damn old to be fighting sum 12 year olds) was happy they lost the game but was able to start a club brawl in the middle of the field. I’m very disappointed in those old people as a whole! Mark Gray (who been on all the 12u teams & Dt & Blak’s social media punching bags) was so upset that he spotted DT and was ready to fight! DT slapped him so hard he remember his son was a lineman! And Maddox 9 from Tucker was the best player all around. Coach Ike is work horsing him right now because that’s really all he got. This team will be interesting to watch in the warzone bowl…especially when Kristi come back from vacation and find out Beiman took her son’s QB position

Seems like when you get to 11u, coaching actually matters. RDU 11u team( who’s 200-3 now) has suffered 3 losses in the past 2 weeks. Looks like FU players didn’t bring in any luck for RDU 12u or 11u. The amazingly top dogs 11u RDU lost a game AGAIN! And i don’t mean a simply lost, they got their ass handed to them by a Cali team in their own tournament ! Yes you heard it! Tera was so heated i actually watched her hair turn from Luke warm orange to pissed off red during the game.
Rumors are circulating that they ready to boot Reggie ONCE AGAIN. They tired of his Baby Back Ribs legs calling the same plays from early years. But I say Riggie isn’t the problem…I say get rid of Jared ass…he’s the worst mascot I ever seen …nigga don’t even look like a dawg …he look more like a gold fish mixed with a lil Iguana. I need all my prayer warriors to keep RDU in your prayers …amen?